Wonder what you can accomplish in seven hours on a longarm? 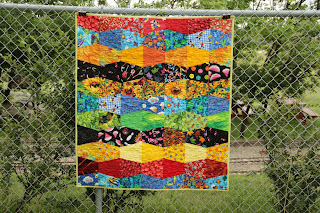 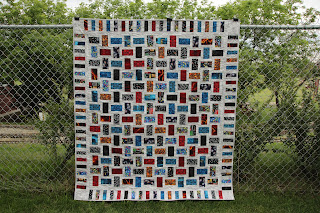 This is what I managed to finish on my second rental. TWO quilts!

The tumbler is just a small one, maybe between a baby size and a lap size, but the other one will fit a double bed. No small feat for a beginner longarm user. 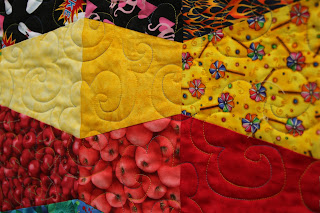 I used the same pantograph pattern on both. 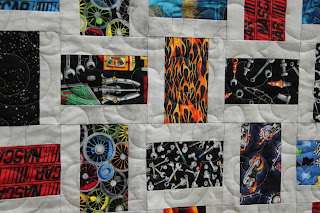 This top was completed about five or six years ago, and it has been patiently waiting for the day it would become a quilt. There are many more where that came from, with the same dream.
Posted by Catrina MacDonald at 7:51 PM No comments:

Someone had written a pattern for a table runner and put a call out for testers. I was one of the lucky ones selected. I received the pattern on a Thursday, and it was to be finished by Monday. I had suggestions right off the hop, just from reading the pattern. I emailed questions, and offered my opinions, even before I'd cut anything or sewn a single stitch. 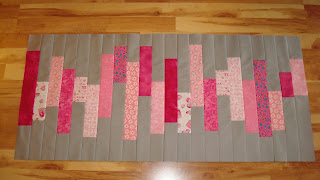 Friday I made the top out of fabric that I already had on hand, just bits and scraps. I must admit, the concept of the pattern was wonderful, even if the pattern itself needed a bit of tweaking (in my opinion). And I really like how mine turned out.

Then it was on to finishing. I tried to just stitch in the ditch, but I didn't like it. It was too plain. I wanted to play with some stitching. So I ripped out my ditch stitching, and watched some free motion videos. 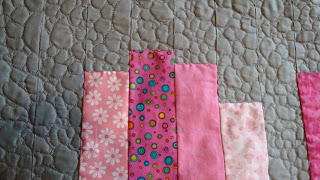 Pebbles! Better than I could have hoped for! But I had no idea the amount of time and thread this design would use up... I'm better educated now. 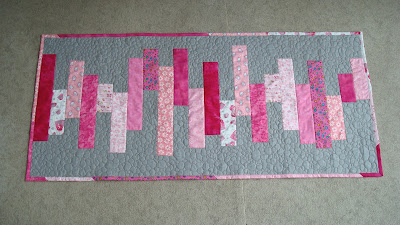 Quilted, bound, and pictures taken. I edited the pattern in areas that I thought needed clarification, or found were not necessary, or some areas were just too "wordy" and submitted it all by the deadline.

I enjoyed being a pattern tester. I would like to do another, if the opportunity arises.
Posted by Catrina MacDonald at 8:37 PM No comments: 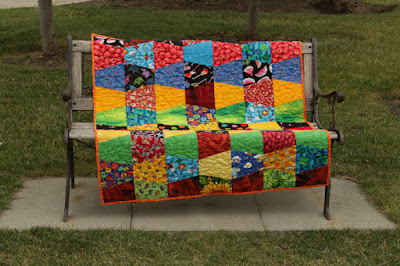 I took a longarm certification course! Eeek! I'm so excited! Three hours of instruction at Wonderfil Threaducation Centre in Calgary, AB, followed by two hours of "do it". 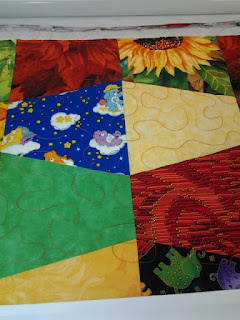 I opted for an overall meander, and love love love it! 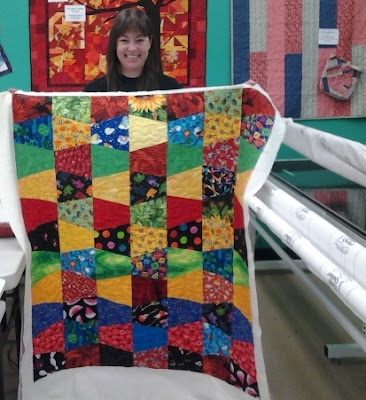 You may recognize this top from a previous post about using up my stash. I chose this top as my first to work on because it was small in size and made from scraps, so if I messed up, no harm done. But I didn't mess up! And I did wonderfully for a first time free motion meander. 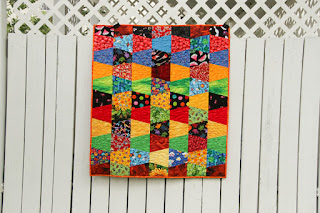 I've already booked my next rental session and am planning on doing the other tumbler quilt top much like this one, only this time trying a pantograph. I can hardly wait!
Posted by Catrina MacDonald at 10:00 AM No comments: 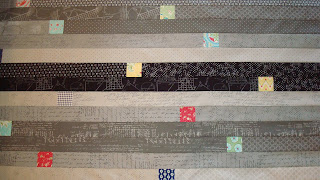 I don't have a decent picture of the whole thing, so all you get is this sneak peak, for now. You'll get to see it better in it's entirety when I have it quilted.
Posted by Catrina MacDonald at 10:00 AM No comments:

This bag was a pattern that people were raving about a couple years ago, so I bought the pattern then, but just finally made it this week when the need arose for a bag big enough to take toddler toys to the park for outings. I used a charm pack and a few scraps, plus leftover grey from a backing on a quilt for the lining. 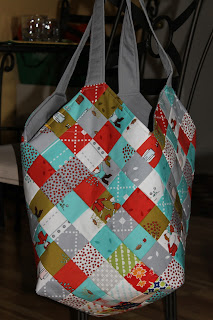 It is a huge bag, constructed in modern neutral colors, so either mom or dad can carry it along.

The project took all day to sew. It was easy with well written instructions, but very time consuming.
Posted by Catrina MacDonald at 10:00 AM No comments:

I've been back working on "projects from the closet". Things that were started, but not completed for one reason or another. The pile is getting smaller and smaller, I'm happy to say. 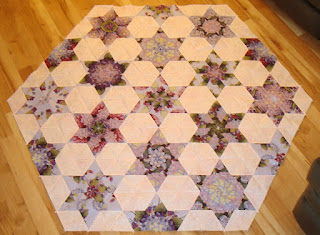 Another Stack 'n Whack has been rescued. I didn't have enough background fabric left to make more blocks, so using the ones that were already pieced, I came up with this layout. It will be a dandy tabletop covering, once it gets quilted. 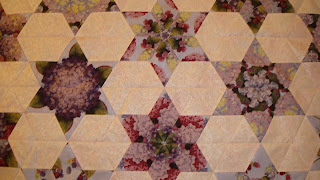 A close up of the individual blocks.
Posted by Catrina MacDonald at 10:00 AM No comments: 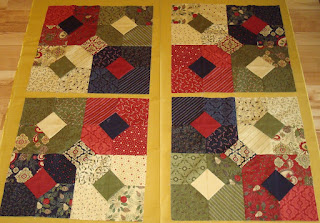 If you've never heard of ten minute blocks, there is a great tutorial on you tube. I used this tutorial, along with a layer cake of fabric to whip up some blocks. 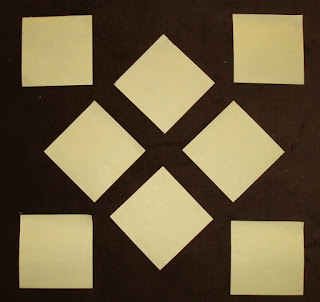 I used sticky notes to design my layout, but the math for piecing the setting triangles was above my ability so I ended up just "winging it" and eventually it came together as I'd hoped. 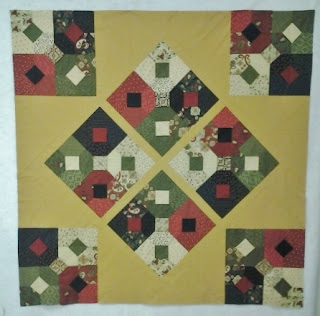 The completed top.
Posted by Catrina MacDonald at 10:17 AM No comments:

Catrina MacDonald
There's nothing as comforting as drinking a good cup of coffee, wrapped in a handmade quilt on a Sunday morning, browsing Pinterest for fresh ideas.